Two concrete implementations of the Grid interface are provided, one for a bounded grid that has a fixed number of rows and columns, and a second for an unbounded grid, for which any row and column values are valid. Rather than have repeated code in two classes, the AbstractGrid class defines five methods of the Grid interface that are common to both implementations.

The code for these methods uses other methods specified in the interface. Here is the definition of the getNeighbors method. Note that the same method works for bounded and unbounded grids. 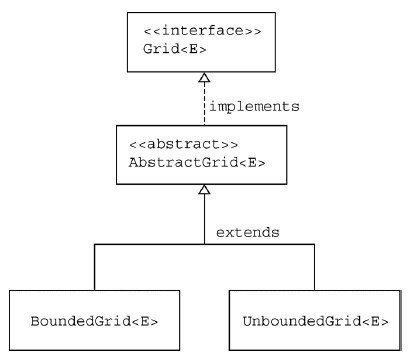 The source code for the AbstractGrid class is in Appendix D.

A bounded grid has a fixed number of rows and columns. You can access only locations that are within the bounds of the grid. If you try to access an invalid location, a run-time exception will be thrown.

The source code for the BoundedGrid class is in Appendix D.

In an unbounded grid, any location is valid, even when the row or column is negative or very large. Since there is no bound on the row or column of a location in this grid, the UnboundedGrid<E> class does not use a fixed size two-dimensional array. Instead, it stores occupants in a Map<Location, E>. The key type of the map is Location and the value type is E, the type of the grid occupants.

The numRows and numCols methods both return -1 to indicate that an unbounded grid does not have any specific number of rows or columns. The isValid method always returns true. The get, put, and remove methods simply invoke the corresponding Map methods. The getOccupiedLocations method returns the same locations that are contained in the key set for the map.

The source code for the UnboundedGrid class is in Appendix D.