Critters are actors that share a common pattern of behavior, but the details may vary for each type of critter. When a critter acts, it first gets a list of actors to process. It processes those actors and then generates the set of locations to which it may move, selects one, and moves to that location.

Different types of critters may select move locations in different ways, may have different ways of selecting among them, and may vary the actions they take when they make the move. For example, one type of critter might get all the neighboring actors and process each one of them in some way (change their color, make them move, and so on). Another type of critter may get only the actors to its front, front-right, and front-left and randomly select one of them to eat. A simple critter may get all the empty neighboring locations, select one at random, and move there. A more complex critter may only move to the location in front or behind and make a turn if neither of these locations is empty.

These methods are implemented in the Critter class with simple default behavior— see the following section. Subclasses of Critter should override one or more of these methods.

It is usually not a good idea to override the act method in a Critter subclass. The Critter class was designed to represent actors that process other actors and then move. If you find the act method unsuitable for your actors, you should consider extending Actor, not Critter.

Before moving, critters process other actors in some way. They can examine them, move them, or even eat them.

There are two steps involved:

The getActors method of the Critter class gets a list of all neighboring actors. This behavior can be inherited in subclasses of Critter. Alternatively, a subclass can decide to process a different set of actors, by overriding the getActors method.

The processActors method in the Critter class eats (that is, removes) actors that are not rocks or critters. This behavior is either inherited or overridden in subclasses.

When the critter has completed processing actors, it moves to a new location. This is a three-step process.

Each of these steps is implemented in a separate method. This allows subclasses to change each behavior separately.

The Critter implementation of the getMoveLocations method returns all empty adjacent locations. In a subclass, you may want to compute a different set of locations. One of the examples in the case study is a CrabCritter that can only move sideways.

Once the candidate locations have been determined, the critter needs to select one of them. The Critter implementation of selectMoveLocation selects a location at random. However, other critters may want to work harder and pick the location they consider best, such as the one with the most food or the one closest to their friends.

Note that there are postconditions on the five Critter methods called by act. When you override these methods, you should maintain these postconditions.

The design philosophy behind the Critter class is that the behavior is carried outin separate phases, each of which can be overridden independently. The postconditions help to ensure that subclasses implement behavior that is consistentwith the purpose of each phase. 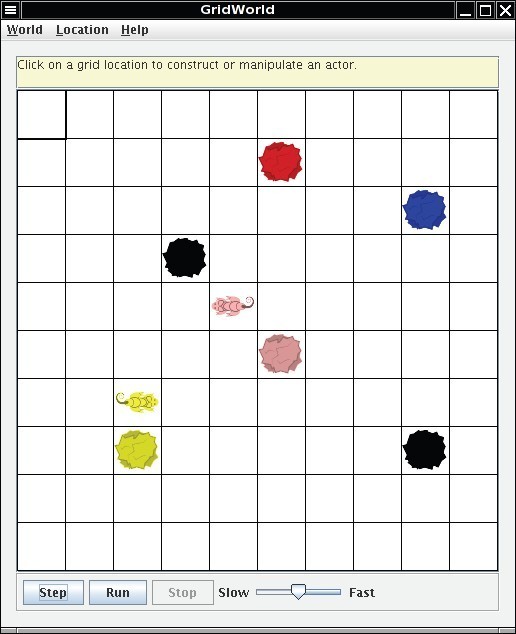 The following figure shows the relationships among Actor, Critter, andChameleonCritter, as well as the CrabCritter class that is discussed in the following section. 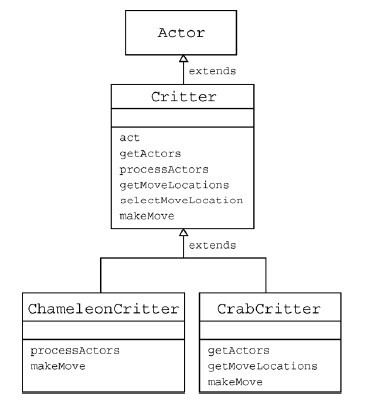 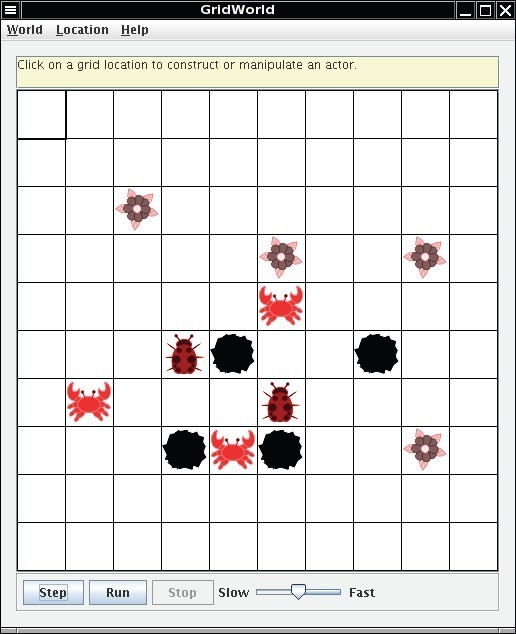 The source code for the CrabCritter class is reproduced at the end of this part of GridWorld.

In the following exercises, your first step should be to decide which of the five methods—getActors, processActors, getMoveLocations, selectMoveLocation, and makeMove—should be changed to get the desired result.