In our example programs, a grid contains actors that are instances of classes that extend the Actor class. There are two classes that implement the Grid interface: BoundedGrid and UnboundedGrid. Locations in a grid are represented by objects of the Location class. An actor knows the grid in which it is located as well as its current location in the grid. The relationships among these classes are shown in the following figure.

Every actor that appears has a location in the grid. The Location class encapsulates the coordinates for an actor’s position in a grid. It also provides methods that determine relationships between locations and compass directions.

To make an actor turn by a given angle, set its direction to the sum of the current direction and the turn angle. For example, the turn method of the Bug class makes this call.

A location in a grid has a row and a column. These values are parameters of the Location constructor.

Two accessor methods are provided to return the row and column for a location.

Two other Location methods give information about the relationships between locations and directions.

For example, assume you have the statement below.

The following statements will result in the values indicated by the comments.

The Location class defines the equals method so that loc.equals(other) returns true if other is a Location object with the same row and column values as loc and returns false otherwise.

The Location class implements the Comparable interface. The compareTo method compares two Location objects. The method call loc.compareTo(other) returns a negative integer if loc has a smaller row coordinate than other, or if they have the same row and loc has a smaller column coordinate than other. The call returns 0 if loc and other have the same row and column values. Otherwise, the call returns a positive integer.

You can check whether a given location is within a grid with this method.

All methods in this case study have the implied precondition that their parameters are not null. The precondition is emphasized in this method to eliminate any doubt whether null is a valid or invalid location. The null reference does not refer to any location, and you must not pass null to the isValid method.

The following three methods allow us to put objects into a grid, remove objects from a grid, and get a reference to an object in a grid.

An additional method returns all occupied locations in a grid.

Four methods are used to collect adjacent locations or neighbor elements of a given location in a grid. The use of these methods is demonstrated by the examples in Part 4.

Finally, you can get the number of rows and columns of a grid.

For unbounded grids, these methods return -1.

The following accessor methods of the Actor class provide information about the state of the actor.

One method enables an actor to add itself to a grid; another enables the actor to remove itself from the grid.

When adding or removing actors, do not use the put and remove methods of the Grid interface. Those methods do not update the location and grid instance variables of the actor. That is a problem since most actors behave incorrectly if they do not know their location. To ensure correct actor behavior, always use the putSelfInGrid and removeSelfFromGrid methods of the Actor class.

To move an actor to a different location, use the following method.

The move to method allows the actor to move to any valid location. If the actor calls moveTo for a location that contains another actor, the other one removes itself from the grid and this actor moves into that location.

You can change the direction or color of an actor with the methods below.

These Actor methods provide the tools to implement behavior for an actor. Any class that extends Actor defines its behavior by overriding the act method.

The act method of the Actor class reverses the direction of the actor. You override this method in subclasses of Actor to define actors with different behavior. If you extend Actor without specifying an act method in the subclass, or if you add an Actor object to the grid, you can observe that the actor flips back and forth with every step.

The Bug, Flower, and Rock classes provide examples of overriding the act method.

The following questions help analyze the code for Actor.

The Bug, Flower, and Rock classes extend Actor in different ways. Their behavior is specified by how they override the act method.

A rock acts by doing nothing at all. The act method of the Rock class has an empty body.

A flower acts by darkening its color, without moving. The act method of the Flower class reduces the values of the red, green, and blue components of the color by a constant factor.

The canMove method determines whether it is possible for this Bug to move. It uses a Java operator called instanceof (not part of the AP CS Java subset). This operator is used as in the following way.

This statement in the canMove method checks whether the object in the adjacent location is null or if it is a Flower.

The following statement in the canMove method checks that the bug is actually in a grid—it would be possible for the bug not to be in a grid if some other actor removed it.

You are asked to create a class called Jumper. This actor can move forward two cells in each move. It “jumps” over rocks and flowers. It does not leave anything behind it when it jumps.

What Makes It Run? (Optional)

A graphical user interface (GUI) has been provided for running GridWorld programs. The World class makes the connection between the GUI and the classes already described. The GUI asks the world for its grid, locates the grid occupants, and draws them. The GUI allows the user to invoke the step method of the world, either taking one step at a time or running continuously. After each step, the GUI redisplays the grid.

For our actors, a subclass of the World class called ActorWorld is provided. ActorWorld defines a step method that invokes act on each actor.

Other worlds can be defined that contain occupants other than actors. By providing different implementations of the step method and other methods of the World class, one can produce simulations, games, and so on.

In order to display the GUI, a runner program constructs a world, adds occupants to it, and invokes the show method on the world. That method causes the GUI to launch.

The ActorWorld class has a constructor with a Grid<Actor> parameter. Use that constructor to explore worlds with grids other than the default 10 x 10 grid.

The ActorWorld has two methods for adding an actor.

The add method without a Location parameter adds an actor at a random empty location.

When adding actors to a world, be sure to use the add method of the ActorWorld class and not the put method of the Grid interface. The add method calls the Actor method putSelfInGrid. As explained previously, the putSelfInGrid method sets the actor’s references to its grid and location and calls the grid method put, giving the grid a reference to the actor.

The remove method removes an actor from a given location and returns the Actor that has been removed.

The relationship between the GUI, world, and actor classes is shown in the following figure. Note that the GUI has no knowledge of actors. It can show occupants in any world. Conversely, actors have no knowledge of the GUI. 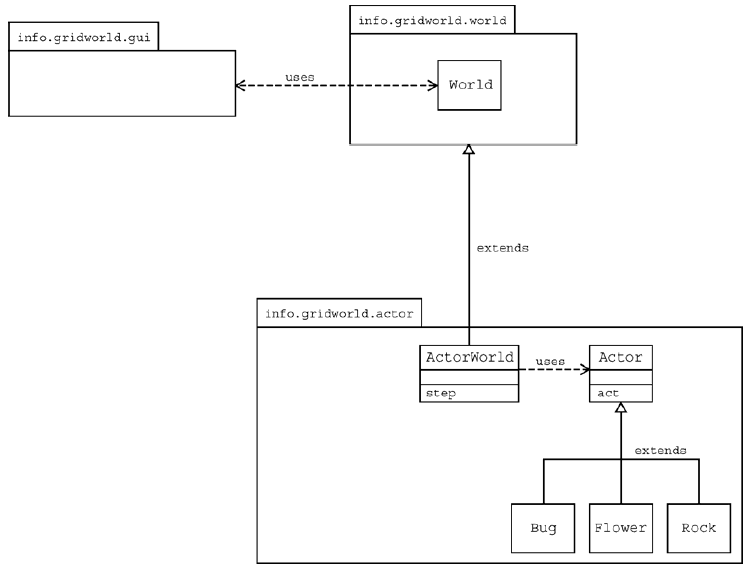